After going ahead through Yohan Cabaye's strike two minutes before half-time, the Geordies could even have been heading back to Tyneside with all three points, had it not been for yet another virtuoso performance from Reds' striker Luis Suarez, who earned his side a point with a sensational equaliser midway through the second-half. 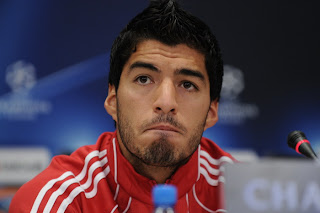 But, with Argentine defender Fabricio Coloccini sent-off for a foul on Suarez with six minutes remaining, Alan Pardew's visitors will be more than happy to leave with a share of the spoils.

After Wednesday night's home defeat to Swansea City saw the Reds surrender their grip on the League Cup, boss Brendan Rodgers reverted to the starting line-up that drew with Everton last weekend, with Pepe Reina and Glen Johnson once again ruled out through injury, whilst skipper Steven Gerrard lined up for his 600th Liverpool appearance.

Despite not having won at Anfield since 1994, Newcastle came to Anfield confident of victory, with boss Pardew picking a bold 4-3-3 formation, despite missing influential midfielder Cheik Tiote through suspension.

But, it was the home side who started the game the brighter, with the movement and pace of Suarez and Raheem Sterling stretching the Newcastle defence a number of times in the opening 10 minutes.

In fact, the Reds felt they should have had a penalty on six minutes when Suarez' was caught by Coloccini, but with the ball striking the Newcastle defender, referee Anthony Taylor waved away the Uruguayan's protests.

With the home side buoyant, young Spaniard Suso saw an effort diverted for a corner, before fellow teenager Sterling fired wide from 20 yards.

But after once again failing to turn their dominance into goals, the Reds suddenly started to get sloppy in possession, in particular the normally-reliable Joe Allen, allowing Newcastle to slowly get a foothold in the game.

The visitors were dealt a blow midway through the half though when midfielder James Perch was forced off through injury, though the forced change actually helped the visitors, with Vurnon Anita's switch from right-back to midfield allowing sub Danny Simpson to come on at right-back meaning the Geordie defence was better equipped to cope with the threat posed from the pace of winger Sterling.

After that, despite a couple of Suarez efforts and an overly-ambitous 60-yard attempted lob from Gerrard, to which Magpies' keeper Tim Krul looked ill-impressed, Liverpool's threat waned.

And to make matters worse for the home side, the visitors struck two minutes before half-time with virtually there first meaningful attack of the game.

When Ba found Hatem Ben Arfa wide on the right, the French winger, faced by Jose Enrique and the backtracking Sterling, showed good skill and pace to reach the byline and cross to the far post, where fellow countryman Cabaye showed great composure to chest the ball down and fire an excellent half-volley past Brad Jones into the far corner of the Kop net.

As if that setback wasn't bad enough for the home support, the half-time interval saw no respite as a faulty pitchside sprinkler resulted in a section of the Anfield support getting a soaking along with the first few rows of the Directors box, though the dignitaries were lucky enough to be sampling the food and drink on offer in one of the Anfield suites.

When play restarted, no doubt on the orders of boss Rodgers, Liverpool immediately upped their tempo, with Suarez their main creative force.

The Uruguayan forced Krul into a save, before a mazy run saw him play the ball through for Nuri Sahin who fired a left-foot shot inches past the Dutch keeper's far post.

On 65 minutes, Rodgers made his first change of the afternoon, bringing on Jonjo Shelvey in place of Suso, who had struggled to make an impact despite some good touches.

Within 90 seconds of the change the Reds were level as Suarez produced a moment of brilliance.

There seemed little danger when Gutierrez wayward pass fell to the feet of Enrique in the Liverpool half. But when the Spaniard hit a long pass over the Newcastle defence, Suarez got in front of marker Coloccini, controlled the ball on his chest, used his second touch to take the ball past keeper Krul, then his third to roll it into the empty net from no more than two yards out.

Within two minutes, Suarez turned provider when he forced his way through down the right before laying the ball off for Shelvey, who, with the goal at his mercy, failed to connect properly allowing Krul to gather.

With top-scorer Ba having left the field through injury shortly after-half time soon followed by goalscorer Cabaye, Newcastle were now finding it hard to stem the Liverpool attack, with another Suarez run and pass sending Sterling clear, only for Magpies' defender Steven Taylor to produce a brilliant last-ditch block.

The Reds were now dominant, but were finding it hard to create any further clear cut chances.

On 84 minutes they were given a helping hand when, following an afternoon of being turned one way then another by Suarez, Coloccini gave ref Taylor little option than to brandish a red card when he aimed a wild lunge at the Uruguayan's calf.

With a man advantage, Liverpool camped in their opponents' half in search of a late winner.

Shelvey saw a shot saved by Krul then sent a weak header into the keeper's hands, before a Suarez free-kick deflected up into the air and bounced over the Magpies' stopper onto the bar.

But the Reds could not find a winner and had to settle for a point at home once more.

Including cup games, this was the eighth home game out of eleven where Liverpool have failed to win.

Performance-wise it was another good Reds' display, but as in other games, the lack of options up front meant Rodgers' side struggled to turn their dominance into goals, despite Suarez' brilliance.

It's been said many times before and will no doubt be repeated on more than one occasion in the next two months, but the Reds' must be counting down the days to the re-opening of the transfer window.

Without Suarez, Liverpool has no sting. The Reds require a striker this instant who can find the back of the opponent's net on a regular basis. Someone who feels at home in any 6-yard box. Liverpool must therefore convert Jamie Hoofer Carragher into a striker sooner rather than later. Carra is a natural in the penalty box. How else can one explain why he is the world's highest scoring CB, albeit all the goals scored were own goals. When Carra is played up front, this tactically- and technically-inept footballer is sure to cause panic and mayhem for both team mates and oppositions alike thereby allowing the Reds more opportunities to score goals that would otherwise never happened.