It's a familiar chant amongst opposition fans, a chant reminding Luis Suarez of his past misdemeanours.

But whilst rival fans are referring to something else in regards the Uruguayan striker, Reds' fans have another term for what Suarez is... World Class!

With Liverpool desperately short on options in striking areas, Suarez has been tasked as the Reds' main, and often only, goalthreat, something which he is revelling in. 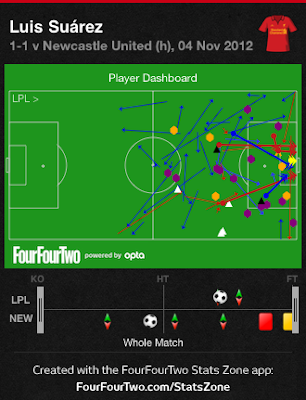 A creator supreme, Suarez' twists, turns and nutmegs have led many a Premier League defence a merry dance so far this season, whilst his finishing, something which he is often criticised for, has improved over recent weeks so much so that he already has 10 goals to his name this season, seven of which have come in the league. Had it not been for the linesman's incorrect decision at Goodison last weekend, that tally would be higher.

Against Newcastle United on Sunday, Suarez was literally a one-man attacking machine. Time and again he ran Geordies' skipper Fabricio Coloccini ragged, so much so that the Argentinian defender eventually lost patience and swung his right boot down Suarez' calf to earn himself a red card, and a breather!

Suarez' fine display was rewarded when he grabbed the Reds' equaliser, though the word grabbed is doing it a severe injustice.

A long raking ball over the Newcastle defence from Jose Enrique saw Suarez get in front of marker Coloccini once more. As the ball dropped, Suarez controlled it on his left shoulder, used his next touch to round the advancing Tim Krul, before tapping in from no more than two yards with his third touch.

It was a sensational goal, but nothing more than Liverpool fans have come to expect from their number seven.

After all, "Luis Suarez.. We know what you are!"

2. TIME FOR STRIKER TO BE ON THE BENCH

The post-match analysis from Sunday's 1-1 draw with Newcastle United was the same as the majority of those which have followed Liverpool matches of late.

A good team performance saw the Reds' dominate possession, spend most of their time in their opponents' half and create the majority of the games' chances. But as in the previous games, the lack of striking options, the excellent Suarez apart, meant that the Reds were unable to breach the Magpies' goal more than once, resulting in a share of the spoils.

As already noted, Suarez was at the peak of his powers and couldn't have offered any more of a threat, so the problem clearly lies with his supporting cast.

Short on numbers, Rodgers has had no choice but to plump for his youngsters as Suarez' main accomplices.

Raheem Sterling has shone with his pace and movement stretching defences, but apart from his winner against Reading, the young winger hasn't displayed the coolness needed in front of goal, with a miss against Alan Pardew's men on Sunday adding to a similar one in last weekend's Merseyside derby.

On the other side, Suso, although not as obvious a threat as Sterling, has offered guile and creativity to the Reds' attack. The young Spaniard though has been unable to stamp his authority on games for long periods, instead flitting in and out of games. More suited to a deeper creative midfield role, he doesn't look the sort of player capable of chipping in with 10 goals a season.

Midfield-wise, whilst Joe Allen's passing accuracy doesn't translate to efforts on goals, Nuri Sahin has at least showed that he is capable of getting beyond the strikers to score, The same applies to Jonjo Shelvey, but talismanic skipper Steven Gerrard often looks too far away from goal to offer a threat.

With the first eleven struggling, thoughts inevitably turn to the subs bench, but the lack of goalscoring options there is worrying, no laughable.

On Sunday, the six outfield subs read, Coates, Carragher, Henderson, Assaidi, Downing and Shelvey. Players with less than 10 Liverpool goals between all six of them, and in Coates/Carragher, Assaidi/Downing, and to a certain extent Henderson/Shelvey, players who offer the same things.

Surely Rodgers should instead use one of the places to include an up-and-coming goalscorer, a genuine goalthreat

Yes, Samed Yesil, Adam Morgan and Dani Pacheco have already tasted action in the first-team and subsequently struggled, but that was as part of much-changed experimental line-ups. Alongside the likes of Suarez and Gerrard, their long-term careers would surely benefit, as well as offering the team a short-term boost of an increased goalthreat.

It's going to be a long 2 months until a Huntelaar shaped striking reinforcement is able to arrive in January, even longer if, and when, Suarez picks up his 5th booking of the season and serves a one-game suspension, so with goals already hard to come by, surely now is the time Rodgers to look to the youngsters once more.

Sunday's game was another match in which Liverpool dominated possession.

Back to front, side to side, Liverpool moved the ball about trying to create an opportunity. 64% of possession and more than double the amount of successful passes than their opponents, suggests they kept the ball well enough.

But the one time the Reds actually made a significant inroad towards Newcastle's goal, it didn't come from a series of short pretty five-yard passes.

When Jonas Gutierrez' wayward pass fell to the feet of Jose Enrique, just inside his own half the Reds' left-back could have followed the pattern of the rest of the game by building from the back with a short pass to one of Daniel Agger, Joe Allen or Raheem Sterling.

Instead, the Spaniard looked up and launched a 50-yard pass over the top of the Newcastle defence.

Immediately it caused panic as the opposition defenders had to turn and run towards their own goal, something they hadn't really done up until that point.

Unfortunately for Coloccini and his teammates though, Suarez had read Enrique's intentions earlier, giving him enough of an advantage to arrive in the box first to control brilliantly, beat Krul and tap into the empty net.

The finish was a thing of beauty, but, after seeing the Reds "tip-tap" the ball about without really creating anything, so too was Enrique's pass.

It showed that a bit of variation can help unlock defences, especially at home. It would be good to see the Reds try it a bit more often.

One of the surprises from Sunday's game was a below-par performance from Reds' midfielder Joe Allen.

Since his summer move from Swansea City, Allen has slotted into the Reds' midfield with ease. His busy nature, ability to win the ball back and amazing pass accuracy, he regularly registers a successful rate in the mid-nineties, has seen the young Welsh star win plenty of plaudits.

However, against Newcastle, Allen suffered arguably his least impressive performance in a Liverpool shirt.

Stats-wise the diminutive midfielder was still amongst the top players. He won 4 out of 5 tackles, and his pass success rate was still as high as 86% from 86 attempts.

But such has been his start to life at Anfield, Kopites had to rub their eyes when Allen gave the ball away cheaply on a number of occasions, particularly in the first half, which allowed Newcastle to slowly recover from a very shaky start.

His 86% pass rate is also misleading as he often dropped deep to send short passes to teammates, when it may have been better to let the likes of Agger or Skrtel bring the ball out of defence, allowing Allen to dictate play further forward.

In general terms, Allen's performance was by no means poor, but such are the levels he has already reached at Anfield, the Welsh star will no doubt be disappointed with his performance.


5. IT NEVER RAINS BUT IT POURS

Liverpool's problems at Anfield over the past year or so have been well-documented.

This season alone, 8 out of 11 matches at Anfield, including Europa League and Capital One Cup ties, have seen the away side leave with at least a share of the spoils. Worse still, in the calendar year 2012 the Reds have enjoyed only three league wins in front of their own supporters, whilst back-to-back victories have not been recorded for over 12 months.

But Sunday's game showed that it's not just the results on the pitch that is proving to be a problem at Anfield.

As the home support sat down for their half-time cup of tea, already reeling after Yohan Cabaye had put the visitors ahead two minutes earlier, a rogue sprinkler only served to further incense the Reds' fans when it malfunctioned and ending up soaking a section of the Main Stand instead of the pitch!

As the dripping wet fans looked on in both anger and amazement, the latest mishap at Anfield brought only one phrase to mind.... "It never rains but it pours". 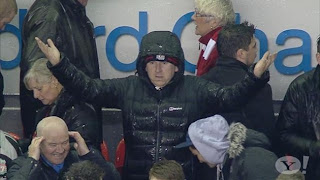 Have you actually watched Joe Allen?! He always sits deep and his pass rate is so high as it's to one of the CB's. That's his game. Personally I find him disappointing in most games I've seen him. Hope he's dropped in favour of Lucas. Doubt it as BR raves about him even when he plays badly, see the Swansea game

That's because he's covering for Lucas until he's back from injury & doing a good job at that!when Lucas is back Allen will play his own game in midfield,distribution with vision to set up attacking moves& holding the ball up when it's needed I.e dictating pace of the game

without him we would be pedestrian in the middle of the park, he is lying deep because we need him to at the moment, oncewe have Lucas back we will push Gerrard on and Allen will have more licence to push forward, our scoring problems at the moment are a lack of people in the box breaking beyond the striker, personally i would start Shelvey in front of Sahin for that one reason.

Reply
This comment has been removed by the author.

Personally I think Joe Allen is a cracking player, but do find that he drops deep needlessly when we have the ball. Particularly at home, we should encourage Agger and/or Skrtel to bring the ball out and push Allen 5/10 yards further up the pitch, which would in turn allow Gerrard and Sahin to play more advanced and support the forwards.

When Lucas is back though I think we will naturally see a completely different side to Allen. Hopefully his successful passes will then be in an area higher up the pitch and thus cause more damage.