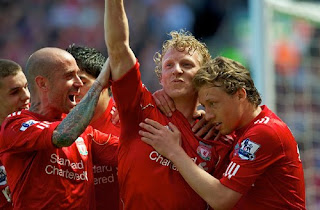 Liverpool rose to fifth on Sunday afternoon, as goals from Maxi Rodriguez, Dirk Kuyt and Luis Suarez completed a 3-0 victory over Newcastle United at Anfield.

The result means that the Reds have leapfrogged Tottenham Hotspur into the one remaining Europa League place, though it must be noted that Harry Redknapp's side have a game in hand.

Liverpool were buoyed by the long awaited return of Glen Johnson at left back, having spent four weeks on the sidelines with a hamstring injury. However, Andy Carroll was only deemed fit for the bench against a club where he managed 33 goals in 91 games.

It wasn't long before the hosts had the deadlock broken, with Maxi Rodriguez maintaining his fine goalscoring form at the Anfield Road end. With just ten minutes on the clock, a lovely sequence of passing ended with a half-volley from the Argentinean being deflected off the leg of Danny Simpson and past the stranded Tim Krul in the Newcastle goal.

Liverpool spent the opening third of the match in control, with Jay Spearing's speculative effort coming in between some smart passing play. The visitors' first real opportunity came on the half hour mark, as one of many dangerous Joey Barton free kicks met the head of Shola Ameobi, who probably should have done better.

The hosts responded when Lucas got on to the end of a John Flanagan cross. His attempt was good but Krul was aware.

The second half began with Alan Pardew's side squandering easily their best chance of the game, as a Kevin Nolan centre found Barton with quite a lot of time and space; his effort managing just the side netting. Luis Suarez's quick feet almost made them pay, as his shot was deflected agonisingly past the post by Mike Williamson.

Just before the hour mark, Liverpool had a penalty. A ball out by Pepe Reina looked set to trickle out for a goal kick, but the willingness and hassling nature of Luis Suarez helped get around Williamson and advance towards the goal. In a bid to recover, the Newcastle defender grabbed hold of the Uruguayan's shirt and pulled him down. Referee Peter Walton didn't hesitate to point to the spot, and Dirk Kuyt slotted home his fourth goal in as many games to double Liverpool's advantage.

The Dutchman then turned provider just moments later, cleverly slipping in Suarez who confidently dispatched from six yards out to all but seal the result.

With the points secure, Dalglish introduced Carroll to a standing ovation from the Kop.

But it was Meireles who was next to threaten, coming within inches of making it four from a Glen Johnson ball from out wide.