Fulham 2-5 Liverpool: Another Maxi hat-trick helps down the Cottagers. 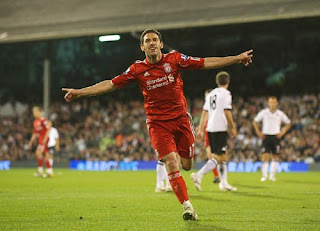 A second Maxi Rodriguez hat-trick in three games helped Liverpool climb back into a European spot on Monday evening, as Fulham were soundly beaten 5-2 at Craven Cottage.

The Argentinean international bagged his second treble in as many weeks having opened the scoring after 36 seconds, with Dirk Kuyt and Luis Suarez also netting in what was a fantastic performance.

Goals from Moussa Dembele and Steve Sidwell proved only consolation, but denied Jamie Carragher a clean sheet in what was his 666th appearance, a haul that takes him second in the all-time list (now behind Ian Callaghan).

The result means that Kenny Dalglish's are now two points clear of rivals-for-fifth Tottenham having played a game more. The sides meet at Anfield on Sunday.

Prior to the match, it became apparent that Andy Carroll would be unable to feature, so the same side that beat Newcastle at Anfield last Sunday started the game.

And Fulham were to suffer similar woes to that of the Magpies, in the form of an early Maxi Rodriguez goal. A sharp, powerful ball down the left hand channel by Lucas Leiva found the advancing Luis Suarez. His low cross then ricocheted off Carlos Salcido towards goalkeeper Mark Schwarez, who couldn't keep out the Maxi rebound.

Sometimes, breaking the deadlock so quickly can be viewed as too early, particularly in a match which the hosts expected something from. However, Liverpool had other ideas, and the advantage was doubled after just seven minutes, with Glen Johnson's high run being spotted by Lucas. The England full-back made the most of the space given to him, teeing up Rodriguez for a composed finish, much similar to his second at home to Birmingham in late April.

Just after the quarter-hour mark, it was three. A deep, diagonal ball from Johnson found a largely unchallenged Dirk Kuyt, who turned and smashed through the hapless Schwarzer in an instant.

Suarez attempted a spectacular fourth after turning Brede Hangeland but failed to hit the target; a rarity thus far in his time at Anfield.

Next, an accurate throw from Reina set Suarez on his way. The centre came to Maxi, whose volley ended up in the stands.

Liverpool's second period started badly, as Raul Meireles left the field clutching the back of his thigh, with Jonjo Shelvey replacing him.

Fulham's performance after the interval improved dramatically, and their proud unbeaten record at home in the 2010/11 season was suddenly airing its legitimacy. They got the goal that they deserved just before the hour, as Moussa Dembele arrived at a smart Bobby Zamora lay-off to reignite the majority within Craven Cottage.

But the fight-back lasted minutes before Liverpool ended the game as a contest; it was Maxi Rodriguez for the third, yet again. A smart one-two with the impressive John Flanagan almost paid off, but the loose ball was picked up again by Rodriguez, and thundered in from outside the area.

Shelvey then set Suarez up for a fifth with fifteen minutes remaining, threading the ball between two defenders before the Uruguayan rounded Schwarzer and slotted into an empty net.

The scoring wasn't complete though, with the hosts getting their second through a wonderfully executed half volley from Steve Sidwell.