Email This BlogThis! Share to Twitter Share to Facebook Share to Google Buzz
Liverpool's push for European football next season took an almighty blow this afternoon, as two goals from Chris Brunt handed West Bromwich Albion a crucial 2-1 victory at the Hawthorns. 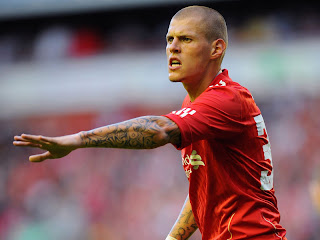 The pre-match focus centred around the manager of the hosts. This was Roy Hodgson's first encounter with Liverpool since he'd left the club in early January, following a disappointing half-year tenure. Ahead of the game, with enquiries on his time at Anfield bound to be brought up, Hodgson claimed circumstances meant that his job was always going to be a difficult one. He pointed the finger at the Liverpool supporters' want for Kenny Dalglish (the current manager), as opposed to himself, which meant that he was facing a struggle from day one.

Liverpool started off brightly, with an Andy Carroll cross finding Luis Suarez, who forced former Reds goalkeeper Scott Carson into an early stop. Just moments later, a Raul Meireles corner met the head of Carroll who flicked it towards the far post, where Dirk Kuyt couldn't force it past Scott Carson, eventually grazing the woodwork.

Just five minutes into the match, Dalglish's initial preparations for the game were interrupted, as Glen Johnson pulled up with what appeared to be a hamstring injury. Sotirios Kyrgiakos replaced him, with Daniel Agger moving to left back.

The game descended into lull, with the next genuine opportunity coming in the 20th minute, as decisive movement from Luis Suarez allowed Dirk Kuyt to get a shot away, which ambled past Scott Carson's left hand post. This was followed just moments later with Jose Reina being forced into his first real save, as he got down well to tame an ultimately poor Chris Brunt free kick.

With just over a quarter of the game gone, Daniel Agger's game was over. An awkward turn seemed to have led to a twisted knee for the Danish centre half, and he was replaced by youngster Danny Wilson. The visitors' Plan A had reached its premature demise.

It nearly got worse for Dalglish's side, with two incidents involving Andy Carroll almost getting him dismissed. A yellow card for a lunge inside the penalty area was justifiably penalised by the referee, but a shove on a West Brom defender was waved away by the officials.

As the first half wore on, the Hawthorns' support were left encouraged by decent opportunities for their side. A powerful Jerome Thomas effort, and a misguided header from Martin Skrtel were both caught admirably by Reina in the Liverpool goal. A Steven Reid header from a Chris Brunt set-piece was also kept out by the impressive Spanish 'keeper.

The second half commenced with an immediate chance for the hosts, as Simon Cox managed to pull away from the opposition defence and force a firm stop from Reina, with the ball eventually being cleared by Skrtel. A sweet strike from Carroll followed, with Carson tipping it over in oustanding fashion.

He could do nothing about the corner that followed though. Raul Meireles' dead ball was accurate, Martin Skrtel was there to head his side into a 50th minute lead, and send the travelling support into raptures.

An interval had obviously benefitted the leading side, as a swift counter attack concluded with an untidy save from Scott Carson, with the tireless forward Dirk Kuyt providing the shot. An unmarked Suarez displayed his annoyance at not being fed through for what would have been an easier chance.

West Brom almost equalised just before the hour mark, with a brilliant cross from Nicky Shorey dealt with somehow by goalscorer Skrtel. The loose ball fell to the feet of Brunt, who struck it first time but was again denied by Reina.

Then, with twenty nine minutes remaining, the home team did equalise. A tangle in the area between Sotirios Kyrgiakos and Peter Odemwingie had the referee dubiously pointing to the spot. Chris Brunt stepped up, and fired home to square the match.

Hodgson's side almost took the lead just moments after, when a darting run from Odemwingie ended in another smart save from Reina. This was followed by a chance at the other end, where Luis Suarez's movement again carved an opening for Raul Meireles who blasted it high and wide.

The predictability of the match had vanished. West Brom were dominating, but Liverpool looked much more effective on the counter attack. Odemwingie and Thomas seemed the most likely to snatch it for the hosts, whilst the visitors' attacking outlet of Luis Suarez was causing West Brom problems.

It was Thomas who mustered up what looked to be his team's last opportunity to win the game, as he shifted on to his right side in the penalty area, but shot into the wanting arms of Reina. That wasn't their last opportunity though, as a Sotirios Kyrgiakos stumble from a long ball fell to the feet of the pacey Odemwingie who, with just Reina to beat, attempted to round the Liverpool goalkeeper. He failed to do so, but was once again brought down, and the second penalty of the match was given. Brunt stepped up once more, and smashed home the winner.

Dalglish's side came almightily close to salvaging a point, but a looping effort from Suarez was somehow plucked off the line.