Email This BlogThis! Share to Twitter Share to Facebook Share to Google Buzz
A hat-trick courtesy of Maxi Rodriguez helped send Liverpool on their way to a comprehensive 5-0 victory over Birmingham City at Anfield, and keep their hopes of European qualification alive. 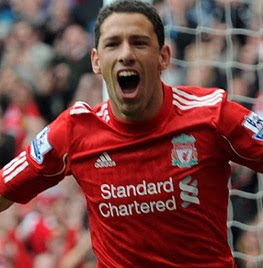 The Argentinean international put Kenny Dalglish’s side into a seventh minute lead, taking advantage of a glaring error from Ben Foster in the Birmingham goal.

Dirk Kuyt then made it two for the hosts, maintaining his fine goalscoring run, scoring at the second attempt after his initial effort had been kept out.


Maxi furthered the home side’s lead in the second half, perfectly timing his run on to a Luis Suarez cross. His third came not long after, eventually forcing the ball past substitute ‘keeper Colin Doyle.

Joe Cole came off the bench late on to round off the scoring, when his mazy run ended in a shot which tamely crossed the line.

The result is the Reds’ biggest victory in 2010/11 thus far, and moves them to within three points of fifth placed Tottenham Hotspur, who dropped points at home to West Bromwich Albion.

Liverpool went into the game attempting to end a seven-year win drought against Birmingham, having not managed a league victory over the second city side since a 3-0 scoreline at St. Andrews in May 2004.

However, the feeling around Anfield pre-match was good, with Academy graduates making up the bulk of the ‘in form’ category. Mature, impressive performances from John Flanagan, Jack Robinson and Jay Spearing have left the Liverpool support drooling at the prospect of the coming years.

The trio retained their places in the starting eleven against Alex McLeish's Carling Cup winners, with 17-year-old Robinson handed his first start for Liverpool at left-back – whilst there was also a place on the bench for U18s' captain Conor Coady. Two fitness tests before the game revealed two different outcomes. Andy Carroll was ruled out, whilst captain Jamie Carragher started at centre-half.

An energetic start to the afternoon by the hosts was awarded with a seventh minute opener, as Maxi Rodriguez capped his long-awaited selection with a goal. A thumping effort from Spearing proved too hot to handle for Foster, allowing the South American to steer the loose ball into the Kop end net.

The goal meant Liverpool have now netted in sixteen consecutive Premier League games - the best run of any side in the division so far this season.

Birmingham's response to the goal was a spirited one and after Craig Gardner hooked an effort over the bar, Flanagan was forced into producing an excellent defensive header to prevent Liam Ridgewell from arriving in a dangerous area.

Despite an improvement in performance for McLeish’s side, Liverpool’s goal advantage was doubled in the 23rd minute, when Dirk Kuyt managed to make the most of another Ben Foster parry.

The hosts were now playing with confidence, as Raul Meireles’ effort was prevented by a last ditch sliding block from Sebastian Larsson. The ball ended up at the feet of Lucas, whose shot appeared to strike the hand of Stephen Carr. Any appeals for a penalty were waved away by Howard Webb.

Birmingham's afternoon went from bad to worse five minutes before the break when Foster was forced from the field having failed to shake off a knock sustained while trying to prevent Liverpool's second goal. His replacement Colin Doyle almost had to pick the ball out of the net instantly, but Kuyt’s header was ultimately a poor one.

In first half stoppage time, Doyle was called into action, denying Suarez after the Uruguayan had shrugged off the challenge of Ridgewell, but failed to generate enough power on his left-foot shot to find the net.

The second half started just as the first, with Suarez clipping a free kick over the bar from distance.

Birmingham’s use of the ball seemed to have more purpose as the half wore on, but any chance of a comeback was ended in the 66th minute, as a chipped Luis Suarez cut-back was confidently dispatched by the unmarked Rodriguez.

The winger completed his hat-trick not long after, as his drive from the edge of the box was just about kept out by Colin Doyle, who was unable to prevent the second effort.

It was another substitute who added Liverpool's fifth, when Cole beat Doyle at his near post via a slight deflection off Jiranek to put the seal on an afternoon to remember at Anfield.