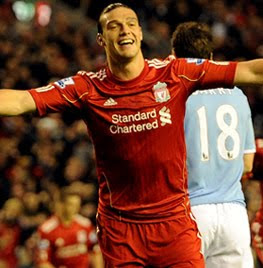 The 22 year old found himself twice on the scoresheet with Dirk Kuyt dispatching the other, as Kenny Dalglish's side offered the Anfield faithful an evening to remember.

The result leaves Liverpool five points off a possible European spot, though it must be noted that Tottenham Hotspur have played one game less.

The game was preceded by a minute's silence ahead of the 22nd anniversary of Hillsborough this week. The manner in which it was observed and the performance that followed from Liverpool was a fitting tribute to the 96 supporters who lost their lives in 1989.

The Reds went into the match with injury problems in defence. Fabio Aurelio came in for Daniel Agger, and 18 year old Liverpool-born John Flanagan was handed his Liverpool debut in what was potentially a baptism of fire.

Not that the under-prepared defence had their work cut out, with wave after wave of vibrant attacking football from the hosts providing the constant theme of the encounter.

It was Liverpool who started off the brightest, with Luis Suarez and Andy Carroll combining to set up Dirk Kuyt, whose dipping volley did little to trouble Joe Hart in the Manchester City goal.

The England number one had to be at his very best to keep out Suarez seconds later though, as a loose pass from Carroll was picked up by the Uruguayan and driven in low, only to be kept out by a tipped save on to the post.

After 13 minutes, the deadlock had been broken, and it was a deserved lead for Liverpool. A speculative effort from Raul Meireles was ricocheted into the path of Andy Carroll who smashed a 25 yard effort into the bottom left hand corner of the Anfield Road end net; reminiscent of the strike for Newcastle against his new club in December.

City's evening wasn't helped shortly after the goal when Tevez departed holding his hamstring, his replacement Mario Balotelli entering the field to a chorus of boos.

The visitors did little to threaten the Liverpool goal in the first half, with the first shot in anger coming just before the half hour mark, as Mario Balotelli attempted to conjure up a Carroll-esque effort, only to see it go hopelessly wayward.

Kenny Dalglish's men, on the other hand, looked capable of scoring with every purposeful move into City's defensive third, and the second arrived in the 34th minute. Suarez, Lucas, Carroll and Aurelio had all tried to force the ball past the opposition defence before the persistence paid off, as Dirk Kuyt displayed the composure which has adhered him to the supporters, burying it past Hart.

Not long after, it was three. A diagonal Raul Meireles ball into the box found the head of Carroll, who sent the ball looping into the net for his second goal.

Liverpool didn't want the interval to come having exhibited arguably their finest 45 minutes of football this season.

Not that it fazed them. The second period began with Kuyt glancing a header just wide at the Kop end.

Lucas should have done better with a free header from a Meireles corner, and Suarez skewed a shot horribly wide, but the home support were in no mood to complain.

Kuyt and Suarez combined once more with 10 minutes to go but again the result was a shot off target, Kuyt dragging it past the left hand post.

City again offered nothing. Pepe Reina didn't have a save to make until 83 minutes following a thunderous effort from Yaya Toure, whilst substitute Balotelli found himself back on the bench to be replaced by the tough-tackling midfielder Nigel de Jong.

Carroll looked to have found his hat-trick on 88 minutes, when Suarez got past his man and crossed to the far post. The January signing headed beyond Hart but it wasn't to be, with his effort bouncing onto the roof of the net.