Supporters in agreement over Hodgson - but not who should replace him 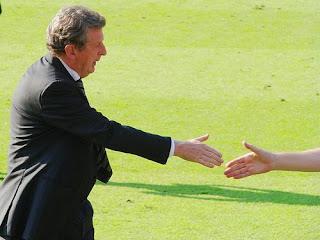 Rafael Benitez didn’t have much to boast about during his last season at Anfield. His side finished seventh in the Premier League, were knocked out of the Champions League in the group stages, and failed to reach the latter stages of either the FA or League Cup.

One thing the outgoing manager may have took pride in however – and knowing the mans character he likely did – is that, given the circumstances he found himself in, a large percentage of the clubs fans supported him right up until the day his ‘mutual termination’ took place.

New manager Roy Hodgson, who has suffered an even more torrid start to his domestic campaign, cannot boast of having the backing of the supporters, in fact the vast majority would suggest the former Fulham boss is out of his dept and needs to leave, preferably before the January transfer window.

One of the largest Liverpool fan websites, Empire of the Kop, which has an incredibly diversified range of readers, conducted a poll last month about the future of Liverpool’s current manager. 81.54% said they wanted Hodgson to leave with immediate effect, 12.5% said they want to wait until January, whilst just 5.96% said wait until the end of the season.

Should new owners the Fenway Sports Group decide they agree with supporters view on the current boss then, under half a season after his initial appointment, Liverpool will once again be searching for a new manager.

Whilst Hodgson’s removal would be met with a harmonious sigh of relief by nearly every Liverpool supporter – with the poll results from EOTK being rather tellingly some of the kindest on Hodgson – when it comes to bringing in a new boss things would no doubt become incredibly difficult.

On Saturday this site asked supporters, via social networking site Twitter, who they would want to replace Hodgson should he leave and why. The results were incredibly varied, from well-known continental managers to some who have yet to manage a team in a European competition.

There were two managers who collected the vast majority of votes, the first of those being Dutch manager Frank Rijkaard.

Rijkaard is a popular choice primarily because of his experience at a major club, Barcelona, and his record of winning trophies. Indeed, during his time as a manager, which started just twelve years ago, Rijkaard has won two La Liga titles and a European Cup with Barcelona and was a European Championship semi-finalist during his first management job with the Dutch national side.

But during his time at Galatasaray his record was slightly diminished, with Rijkaard having led his side to a disappointing finish to the 09/10 season, followed by four defeats in eight at the start of this campaign, leading to his contract being terminated on October 20th.

Some have suggested his failure at Galatasaray is down to him not having influential coach Ten Cate, who served as Rijkaard’s assistant during his Champions League winning campaign in 2005/06, by his side. Cate Is however currently out of work, but bringing him to Anfield to work with Rijkaard, should he want to, would mean displacing Sammy Lee.

The second popular choice for the position is on the opposite end of the scale from Rijkaard – current Bolton Wanderers manager Owen Coyle.

Coyle has much less experience than Rijkaard and, for that matter, Roy Hodgson. What puts him in contention however is the style of football he tries to make his team play, with Bolton, notoriously known for their long-ball, defensive football in the past now playing a much more fluid style of attacking game, which has took them from relegation candidates to sixth place in the league.

His lack of experience however will always be held against him. Coyle only started his management career in 2005, with St. Johnstone, and has yet to win a major trophy, with his biggest achievement being a Championship Play-Off win that took Burnley into the Premier League.

There are some other coaches who have been named. Some want former boss and Liverpool legend Kenny Dalglish to take control, though many would argue the Scot could taint his Liverpool record and reputation by taking to the hot seat so long after managing a Premier League club.

Guus Hiddink, Didier Deschamps and Martin O’Neil are all names that have been quoted by Reds supporters, but at the same time other fans have pointed out the pitfalls of such appointments –clearly Liverpool fans across the globe have very different ideas of the qualities the next manager needs.

At current their may be harmony amongst Liverpool supporters, with most wanting to see the back of Roy Hodgson. But should he leave then deciding on his replacement would be close to impossible – as almost anyone who comes in would once again split the fan base.