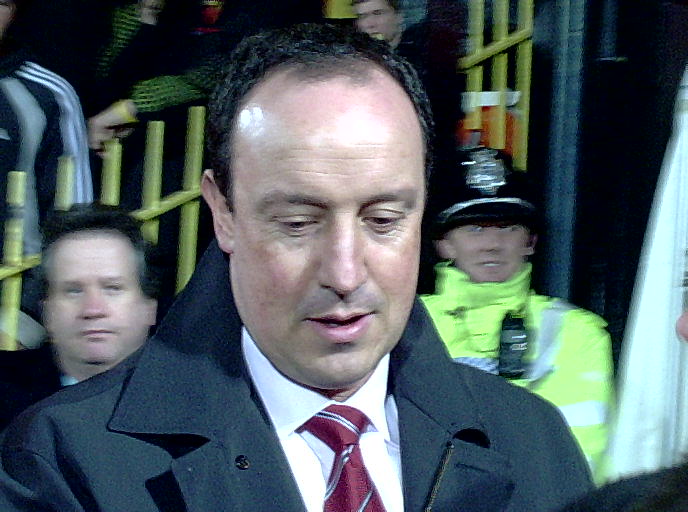 With Christmas Day fast approaching, Rafael Benitez will be spending time with his family at his home in Liverpool. Outside his window he’ll see the effects of the sub-zero temperatures currently gripping the nation. In his head, however, he’ll be contemplating the even more chilling prospect of losing his second job this year.

This time last year Benitez was faced with a similar prospect. His Liverpool side, who had been considered title contenders at the start of the season, were sat in 8th place, 14 points adrift of top of the table Chelsea and seemingly out of contention for the Premier League crown. To add to his worries, the Reds had just been knocked out of the Champions League in the group stages, with a third place finish in Group E relegating them to the Europa League, UEFA’s second-tier competition.

As 2010 progressed Liverpool’s hopes of a top four finish, and a place in the Champions League, slipped away just as their start of the season title expectations had. Former Manchester United player Diego Forlan ended any chance of a silver lining for the Reds at the end of the season when his last gasp goal in second-half of extra-time in the semi-final of the Europa League confirmed another season without a trophy at Anfield.

It was Benitez who took the fall, when in June the board decided that the Spaniards services were no longer required at Anfield, releasing a press statement stating that the Liverpool boss was leaving the club through a mutual termination of his contract.

Though Benitez popularity amongst Liverpool supporters had dropped over the course of the season it still came as a shock to a large percentage of the clubs fans who had built a strong relationship with the manager following successes in the Champions League in 2005, FA Cup in 2006 and a close run in the league in 2008/09.

Indeed, the common few among supporter was that after three years of success, culminating in a Champions League final defeat in Athens in 2007, Benitez’s ability to bring success to Liverpool was severely damaged by owners Tom Hicks and George Gillett, who were repeatedly accused by club supporters and Benitez himself of failing to invest in the squad.

For many Benitez’s departure from Anfield was one brought about by his relationship with the board of directors. Since their arrival Benitez had been at loggerheads with Tom Hicks and George Gillett and things got worse for the Spaniard when Christian Purslow was appointed as the clubs Chief Executive, with the Harvard Graduate speculated to have had a poor relationship with Benitez, which was ultimately played a key part in his removal.

Now, at Internazionale, things seem to be repeating themselves for Benitez, who since arriving at the San Siro has seen his relationship with club President Massimo Moratti deteriorate after a number of very public confrontations over the clubs progress this season.

After a poor start to their Serie A campaign Inter find themselves in seventh place, thirteen points off city-rivals AC, although Benitez’s side can boast having two games in hand to reduce the deficit.

Though Inter didn’t bolster their ageing squad in the summer and have had a torrid time with injuries, amounting over forty so far this campaign, Benitez has found himself taking the majority of the criticism for the Italian champions current form, and a win in the World Club Cup seemed integral to his future.

Whilst Benitez managed to steer his side to a win in the competition, claiming his second trophy since arriving at the club, his post-match press conference – in which he issued a ‘back me or sack me’ statement to Moratti – left many believing his time at the San Siro was up, with the Inter president claiming Benitez’s comments were "not suitable for the situation".

On paper Benitez can justify his position as manager of the Italian and European champions. His achievements as a manager include winning the Champions League, FA Cup, UEFA Super Cup and Community Shield with Liverpool whilst taking Valencia to two La Liga titles and a UEFA Cup victory, not to mention his Italian Super Cup and World Club Cup wins during his short time at Inter.

Many clubs around Europe have taken note of Benitez’s abilities. Outside of the major clubs that have hired the Inter boss many have tried to attract him, particularly during his time at Liverpool when clubs such as Real Madrid, Juventus and Bayern Munich were all linked with the 50-year-old.

Yet if Benitez was to leave Inter now he’d be walking away with his reputation amongst Europe’s biggest clubs damaged. Not because of his managerial ability, his record stands up for itself, but instead because for a board of directors hiring Benitez, with his reputation to be as astute a politician as he is a manager, is seen as too much of a gamble, as his run-ins with Moratti have proven.