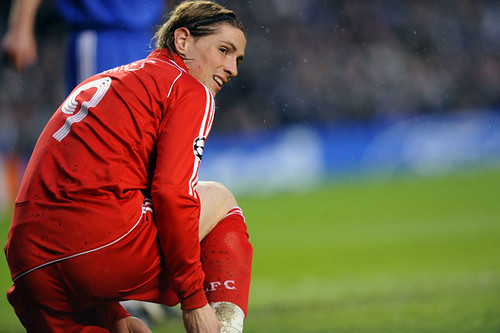 Roy Hodgson's perfect start to life at Liverpool, from a European if not domestic point of view, came to a dull, predictable yet painful end on Thursday, as his team once again looked second best against what should have been, in theory at least, distinctly inferior opposition.

Not on Thursday night though, nor on the preceding Saturday, nor on the Wednesday before that, nor on the Saturday another ten days previously to that etc. In reality the list is endless and the game against FC Utrecht was merely the latest installment. So, let's pause for a second to consider where it went wrong, yet again, for LFC.

In many ways, it already seems like a cliché, but the Poulson-Lucas reared its ugly head again against the Dutch outfit, offering hard work and grit but little else in the centre of the pitch. Most sensible fans don't seem to hold any particular grudge against either, individual player (though many have noted the Dane’s transition into English football is somewhat less than seamless); it is, instead, when are picked together, at the heart of Liverpool's midfield, that seems to strike a nerve with more than a few of these observers. Lacking both the real authority to command the game, as well as the natural creativity and passing ability to influence the game from a more attack-minded point of view, it was partnership that never really got going. Not that either played terribly, but their respective limits as players are mercilessly exploited when they find themselves lining up alongside one another.

It would be unfair to lay too much blame at either player's feet, however. As mentioned above, neither had a particularly bad game and the respective and collective failure to significantly influence the game were entirely predictable from the outset. At the end of the day, though (to use that beautiful clichéd expression, that is a favourite among many a manager and player alike) this was just one, admittedly rather big, reason behind Liverpool's ultimate failure on the night.

The lack of influence from Joe Cole was far more worrying for Liverpool fans. Bizarrely voted the team's man of the match by the official website's journalists he was, somewhat belatedly removed by Hodgson and replaced with Maxi Rodriguez with just over ten minutes of normal time to play (even more strangely was that this was Roy's only substitution throughout the course of the entire evening, but more on that later). Aside from a few early decent shots at goal, it is hard to remember any the former Chelsea man making any other remotely significant contribution on behalf of his team. Perhaps this is just me, I'm genuinely not sure, but, Cole certainly seems to present a genuine area of concern for Hodgson. Thus far, ineffective on both the left and as 2nd striker, is central midfield the place for him? Or would he present similar tactical indiscipline to what Steven Gerrard does? Is he even a definite starter for Liverpool? In his defence, he seemed somewhat slightly short of match fitness, and is still adapting to the demands of a new club and it would be hugely unfair to come anywhere close to dismissing him but, equally, these should be areas of concern for Liverpool fans. As ever, time will tell.

I don't want to drag on too much (although I realise I have probably already failed in that aim) so I will quickly point out the other areas of concern that Thursday presented. Martin Skrtel was once again not up to standard and, whilst he is still fairly young, it is hard to remember, the Arsenal game aside, the last time he had a genuinely good game for his employers. Unconfident and lacking authority in his defensive duties, the sooner Daniel Agger returns, the better for Liverpool. Once again he hardly played particularly badly, but equally it seems a long time since the Martin Skrtel of two or three seasons ago last took his place so fearlessly at the heart of the club's defence.

Without wishing to state the obvious, Fabio Aurelio is another whose reputation seems to enhance with every passing week he finds himself in the club's treatment room rather than on its grass. This is in no way a criticism of Martin Kelly who, aside from 2 moments of defensive naivety did himself proud with his mostly solid display. Instead, this is more a general observation. Paul Konchesky is not up to standard, and the sooner Aurelio is able to return, the better. (/stating the obvious)

Whilst this was almost entirely a negative display, there was one moment that had the vague air of optimism surrounding it. Unsurprisingly, Pepe Reina was 85% responsible for it. As he collected the ball into his hands to denote the end of a period of sustained Utrecht pressure on the LFC goal. Without batting an eye-lid, let alone pausing for a sigh of relief as is the custom of many other goalkeepers, the Spaniard, instead, instantly sought to turn defence into attack and, for not the first time, it worked a treat. His astonishing powers of distribution finding Dirk Kuyt on the edge of his onetime employers’ penalty area. He, in turn, carved out an opening for Torres who was only denied by an exceptional save from the Utrecht goalkeeper. It may not have led to a goal but it still demonstrated the overwhelming value that Pepe Reina presents to his team and, was thus, worthy of note, in my book at least.

Well, that concludes all I really have to say about this rather forgettable clash; Liverpool have more important matters awaiting them in the league and, even more so, off the field where the issue of ownership and the club's long term future still cast a huge shadow over the team's on-the-field affairs, whether that means Utrecht or Unirea Urziceni.