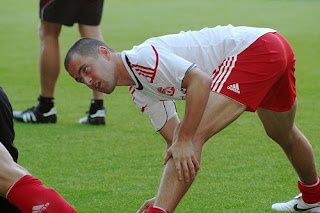 Joe Cole’s arrival at Anfield was no doubt a promising beginning to Roy Hodgson’s tenure in the Anfield hot seat, but at the end of the transfer window Liverpool supporters would have been forgiven for thinking the signing was just an attempt to paper over the cracks.

When the former Chelsea star posed in front of a collection of photographers, Liverpool shirt in hand, the clubs supporters, including myself, will have no doubt seen the signing as a step in the right direction, even if he was brought in on a free.

Not only did Cole’s signing add creativity to a team noticeably lacking it over the past twelve months, it also acted as a catalyst to speed up the commitment to the club of both Fernando Torres and Steven Gerrard, with the Liverpool skipper being very forward about his admiration for the Reds new signing.

With Cole signed and Torres and Gerrard committing at least their short-term futures to the club it would be fairly easy for some to think Tom Hicks was actually coming good on his promise of a “big summer” in the transfer market at Liverpool.

Of course Tom Hicks and George Gillett had form and yet again they broke promises and another summer of players heading through the exit door has left Liverpool in a similar predicament to last season – seriously lacking in strength in depth.

While 17 players were shipped out of Anfield this summer only nine were brought in, leaving Liverpool thin on the ground but, to the glee of the current owners, £17.15 million to the good with more savings to be made over the course of the next season in a reduced wage bill.

Maybe the most disappointing thing for Liverpool fans was the clubs inability to sign a new striker on deadline day, despite calls from all corners for some back up for the injury-prone Fernando Torres, who suffered a torrid season on the sidelines during the last campaign.

The club reportedly sent Ryan Babel to London in a helicopter to try and lure West Ham into a deal for Carlton Cole, whilst also offering Brazilian midfielder Lucas Leiva.

The one thing the club apparently weren’t willing to do, despite the profits made over the summer, was offer more cash for the England striker, despite the fact Roy Hodgson had, just days earlier, publicly stated the need for extra firepower at Anfield.

Just as worrying was the players that walked through the exit door at Anfield, Javier Mascherano was the most prominent departure, closely followed by Chelsea-bound Yossi Benayoun, who headed for London for a reported fee of over £ 6 million.

Along with these big name departures the club also allowed a number of promising, young players walk out of the club, with highly-rated Lauri Dalla Vale heading to Fulham along with  Alex Kacaniklic in a deal for Paul Konchesky - a player who arrived on Merseyside to understandably mixed opinions from the Liverpool faithful.

Out of the 17 players who left Anfield nine could be consider as young players, with many of them showing promise. Liverpool has never been a club to sell off its youngsters, especially not in order to finance the signing of journeymen such as Paul Konchesky who are in what could be considered the latter stages of their career.

But under the Penny-pinching regime of Tom Hicks and George Gillett anything goes and if a player can be brought in without the need to fork out a big transfer fee it will be done, even if it does potentially damage the future of the club and undo the hard work by many in the academy and reserve setup.

Amongst this ‘fire sale’ Alberto Aquilani, who has thus far failed to make a major impact at Anfield, was also shipped out on loan to Juventus, who have agreed a fee to buy the Italian should they wish to at the end of the season.

Yet not long before the players agent had talked of how Roy Hodgson had given the player assurances that he had a future at Liverpool. Something seriously contradicted by what happened in the months following. You have to feel this deal may well have been taken out of the managers hands.

Liverpool also lack in depth and varying options on either wing. Whilst Milan Jovanovic and Dirk Kuyt are very talented players what they are not is out and out wingers. Ryan Babel is also yet to prove himself to the Kop faithful, with Maxi Rodriguez being one of the few to spend a considerable amount of time out wide and show positive results.

So, going into this summer Liverpool lack creativity in the middle of the park, have no out and out wingers and have no back-up striker in case Fernando Torres does suffer yet more injuries, or doesn’t recover from his current problem.

Looking at everything that has gone on at Anfield in the past two months you have to wonder just how much the squad has improved, if at all. Some might even say the squad has become smaller and slightly weaker, as stated by Barcelona’s Xavi recently.

One thing’s for certain, Roy Hodgson will have to once again show his ability to work with limited resources as thanks to the broken promises of a “big summer” by Tom Hicks Liverpool face a struggle to keep up with the high-spending, quality packed, squads that we look to compete with.