Joe Cole in the hole... or maybe not? 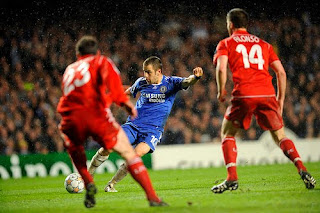 My view on how Joe Cole and Milan Jovanovic bring an excellent conundrum to Liverpool’s game.

When news had filtered through that Roy Hodgson had pulled of a bit of a masterstroke by signing the creative and versatile Joe Cole I started to wonder where to play him if fellow new signing Milan Jovanovic is on the same team sheet.

On paper they can both play on the left side of the game as midfielders, however Jovanovic has spent the majority of his career as a striker, only recently being pushed to the chalk line in a similar fashion to Dirk Kuyt.

Cole however started as a wide-man and has gradually worked his way infield to the fit into the role behind the striker in the hole.

Breaking it down I would personally opt for Cole to occupy the left hand side of attack with Jovanovic as the second striker, the main reason for this is I feel Liverpool need more creativity in the middle of the park. While Alberto Aquilani may turn out to be the creative spark he was for Roma, I feel the emphasis has been on stopping the ball getting to the defence in the last season as apposed to setting up attacks.

So to have a possible midfield involving the three creative midfielders in Joe Cole, Steven Gerrard, Alberto Aquilani and Maxi Rodriguez sounds a more interesting to watch prospect for me.

I would also enjoy seeing Cole and Jovanovic swap positions during the match, I feel it could help increase the tempo of the game, much like we saw with England’s performances in the world cup qualifiers.

Either way whatever happens I trust that Roy Hodgson has it all under control, and I look forward to seeing it all unfold next year.